The following simulation was designed to mimic the simulation setup in the paper “Maximum Likelihood Identification of Inertial Sensor Noise Model Parameters” of the Generalized Method of Wavelet Moments (GMWM) versus that of the integrated maximum likelihood (). The simulation setup as well as the code used to generate the simulation is contained below to ensure reproducibility.

On page 172 of Section V-C, the authors of the paper provide a very brief description of the simulation run. In this particular case, they emphasis that the parameters used within the simulation are that of -gyroscope of the BMX0555 MEMS IMU listed in Table II on page 171. However, the simulation results presented in box plot form in Figure 11 on page 173, indicate that these values could not be selected. Hence, we asked the authors to provide the values for the simulation. Thus, the values listed next are not found on the table. We appreciate the authors taking out time to respond to our request.

The values the authors used to conduct the simulation are:

Note: The values listed are the standard deviations and not the variances.

From the simulation, the authors state that the signal lasts for 12 hours. The frequency is not clearly stated, however, previous sections of the paper use 400 Hz. Thus, we have . With this in hand, the signal length of the synthetic data is given from: .

Converting a discrete-time model to a GMWM suitable modeling term

On page 167, the authors then go on to define a discrete-time equivalent of the bias process (1b) as:

Given this formulation, there needs to be a slight transformation so that the gmwm R package is able to both simulate and estimate the parameters.

Converting to equations preloaded into the framework yields:

Hence, to generate the models one should use:

Converting from the GMWM back into the discrete-time model

In order to properly compare the results, the previous transformation into the GMWM must be reverted. To do that, one must solve the equations in terms of the discrete-time model.

Converting from an AR1:

As a quick note for this section, although the GMWM has no trouble handling data sets of several million of observations, it may run into memory issues when the length of time series exceeds 10 million. Indeed, the simulation study presented in this section considers a sample size exceeding 17 millions observations which may be difficult handle for most personal computers. Nevertheless, using one core of an Intel E5-2680V3 2.5 GHz Haswell CPU with 16 GBs of RAM, the gmwm is able to run in less than a minute for a large sample size. This memory limitation lies in the calculation of the Wavelet Variance (WV), which represents the computational bottleneck of the method and requires operations. As a comparison, likelihood methods typically require at least operations and from our experience are far less stable. Moreover, the computational time of the GMWM can, if needed, be reduced by considering a simpler moment-based estimator. For example, a possible remedy to this computational bottleneck can be found in the construction of a generalized method of moments estimator which uses the autocovariances at lags . Such an estimator would only require operations while maintaining the same statistical properties as the GMWM. Though, this reduction in the computational burden would come at the cost of a reduced in efficiency which may not necessarily be problematic for such a large sample size.

Note, from the above equation manipulations, the values that will be used to generate the models are:

These values are generated in the “Conversion to GMWM Model Parameters”

Before observing the results, the transformation back into the discrete-time scale model must be performed. To do so, one must:

Below are the results from the parameter recovery simulation. 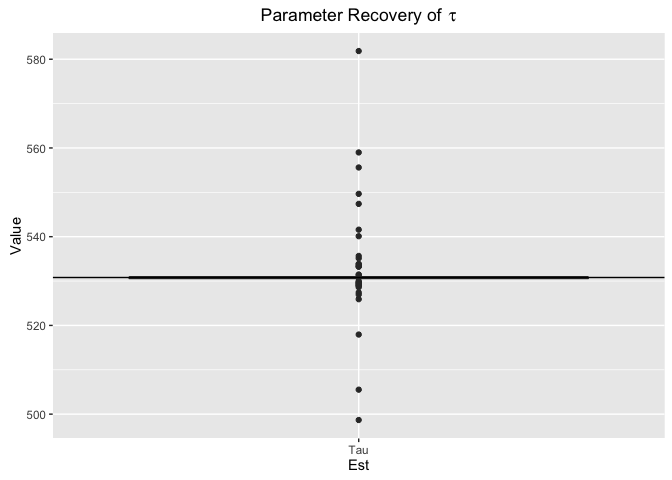 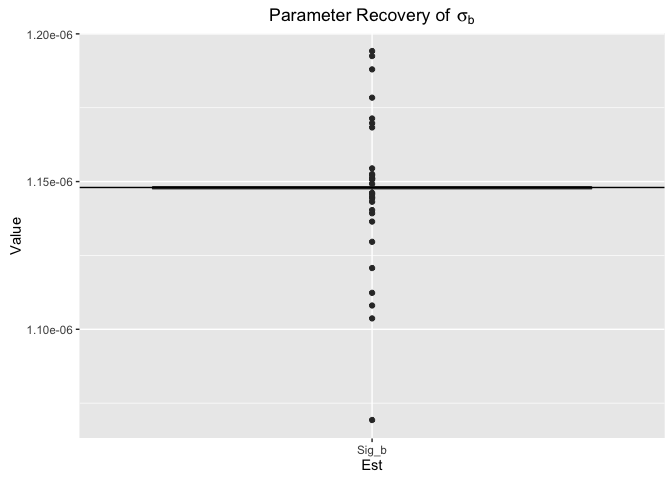 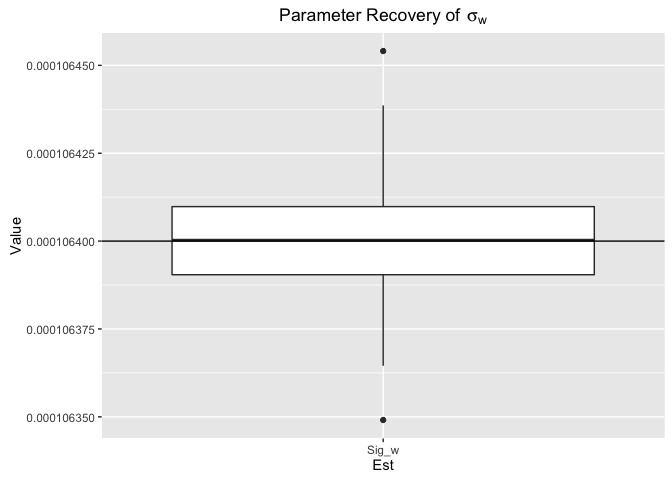